Ed brings more than 40 years of global business experience. Prior to joining ClickMedix, he was the Chairman and President of iSoftstone Inc., a global services company providing Information Technology Outsourcing, Consulting and Business Process Outsourcing. He helped the company with acquisitions in the US and brought the company public on the NYSE in Dec 2010.In 2003, Ed was Operating Partner at ING Baring Private Equity Partners Asia(BPEP Asia) that managed over US $500 Million investments in the Communications andIT sectors.From 1992 to 2000, he was Corporate Senior Vice President and President of Electronic Data Systems (EDS Corporation) and was responsible for Asia Pacific region consisting of 11 Countries. During his 8+ years with EDS, he brought outsourcing to Asia Pacific region and led the Company’s regional expansion from $100 million to more than $1.2 billion in revenue.Prior to joining EDS, Mr. Yang was Corporate Senior Vice President for Wang Laboratories, responsible for Asia Pacific and Americas regions. He was credited with bringing offshore R&D and manufacturing to Asia, and established the company’s first mainland China joint venture partnership in Shanghai in 1980.

Ed has served on the board of Novelis Inc., a NYSE $8 Billion aluminum-rolledproduct company based in Atlanta, GA. He has also served for 15 years on the Board of Regents of Pepperdine University.He currently serves as Chairman of the Board of Yunnan Project Hope for the minorities in Yunnan Province, China. The program started in 1995 and has built over 35 elementary schools in the minority regions of Yunnan and Tibet in China. Mr. Yang also serves on the advisory board of Asian Americans Advancing Justice, Los Angeles, and numerous startup companies.He is also the author of the award-winning book, “There are no fortune cookies in China”. In his spare time, Ed speaks at seminars and advises corporations in their cross boarder businesses between East and West.

Ed graduated from National Taiwan University with a BS in Chemical Engineering and MS from University of Massachusetts, and his PKE-MBA degree from Pepperdine University. 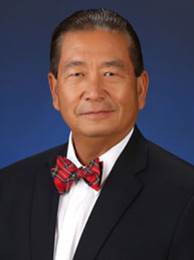